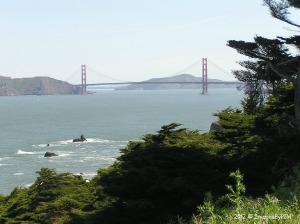 On a warm and sunny day in late April, Sherry and I took a short road trip. Our destination was Lands End Coastal Trail on the northwestern edge of Golden Gate Park, and a hike to the labyrinth at Lands End Point.

We began planning this trip nearly three years ago, when the Sacramento Bee newspaper printed an article by Chad Jones on Sunday, August 30, 2009. I was excited about seeing the Golden Gate Bridge from the south side, and walking along this part of the headlands.

But life events – and bridge repair – caused us to postpone … indefinitely.

So when my dear friend, Sherry, told me that she and her family had visited it recently, and what an awe-inspiring walk it had been, I knew it was time for me to go. We found a Friday that, miraculously, was clear on both of our calendars, and with lunch and cameras packed, we headed west.

The paved trail was wheelchair-accessible for the first portion of our walk. Not to the labyrinth, though; sadly.

The afore-mentioned Sacramento Bee article provided some historical information about the area. I’ve included it below because, for me, it helped set the tone and encouraged me to be mindful during our walk.

“Originally the home of the Yelamu people, part of the Ohlone tribe, this windswept and desolate area was later held by the Spanish (mid-1700’s), followed by the Gold Rush of the mid-1800’s.

“In the 1880’s visitors boarded Adolph Sutro’s steam train to ride – for 5¢ apiece – from downtown San Francisco to his elaborate Cliff House restaurant and Sutro Baths. “Opened in 1896, the baths could house 10,000 people, some enjoying the water, others exploring Sutro’s collection of tropical plants” … or the amphitheater shows, galleries and museum exhibits (including an Egyptian mummy).

“The restaurant, of course, remains. The baths are mostly gone; a four-alarm fire in 1966 destroyed the structure; the ocean has helped reduce the Sutro Baths to ruins.”

Sherry and I started our walk from the Lands End Parking area. 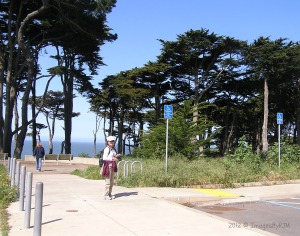 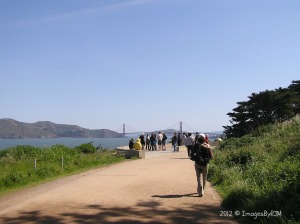 I wanted to check accessibility of the trail, and found that the path was paved until we got to Mile Rock Overlook. The pavement ended, and at first the dirt path seemed to be level and smooth enough for wheelchair access. However, we soon came to steps that would not accommodate a chair, nor would much of the path thereafter. 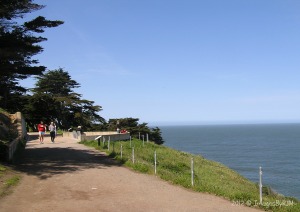 Edge of the Path – Overlook 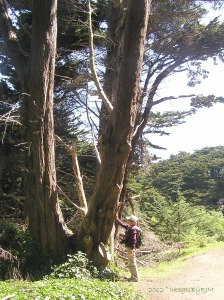 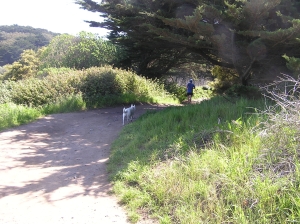 Sherry is a kindred spirit. Especially when it comes to photography! 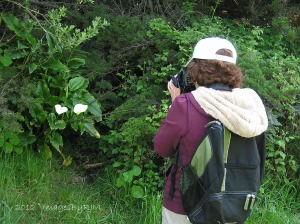 We chose not to ascend these steep steps, which would have taken us to a eucalyptus grove and another view. 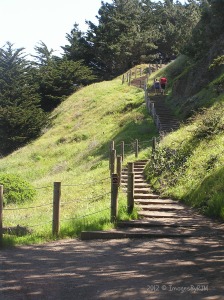 Instead, we backtracked a little and went down the many, many steps to the “Y” in the path.

Had we gone left, we would have reached Mile Rock Beach. 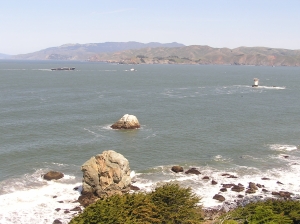 We veered to the right instead, and walked out to Lands End Point, where we picnicked and enjoyed the view and the beautiful weather. 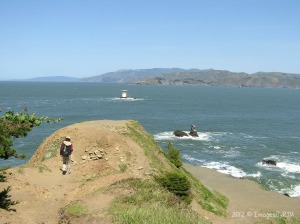 And then … the labyrinth. 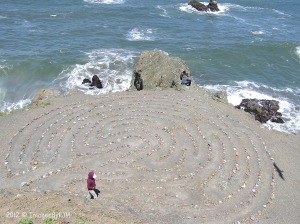 Situated – literally – on the point of Lands End, the labyrinth was created in 2004 by Eduardo Aguilera. Made of small stones, Aguilera described the walkable maze as a “shrine to peace, love and enlightenment.” 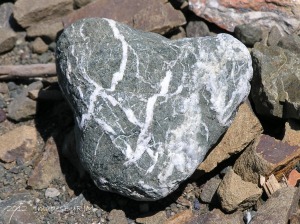 By the view – Pacific Ocean, Golden Gate Bridge – and by this sacred space. Walking a labyrinth is, for me, a spiritual experience. 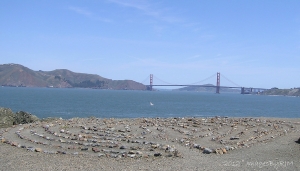 We took our time, and mindfully walked our path. 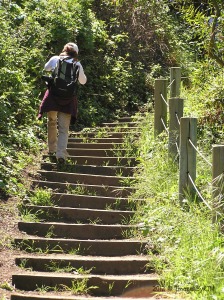 Finished with our labyrinth walk, we headed back up the umpteen stairs

Retracing our steps, we headed to Point Lobos and the Sutro Baths. They, too, were inaccessible. 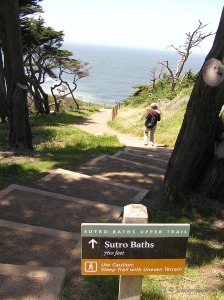 As was mentioned above, the baths were destroyed by a fire in 1966. 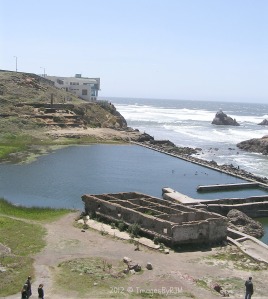 We had a lovely day, and because we wanted to maintain our happy mood by avoiding the Friday afternoon westbound traffic, Sherry and I left at 2:30 p.m. However, there are more trails for me to explore, and I plan to return to Lands End in the very near future! 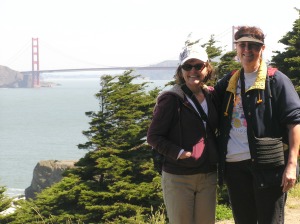 2 replies on “Lands End, and the Labyrinth thereon …”

I know just the place! 🙂

I revisited the labyrinth yesterday. There are 120 stairs from the Coastal Trail down to the path that leads to the labyrinth (or, if you turn left, to Mile Rock Beach).

I also followed the Coastal Trail to Eagle’s Point Overlook and the rest of the trail. There are many steps to reach the summit (near Dead Man’s Point). However, there are rock benches along the way, for those who want to “catch their breath” and enjoy the view.

While that portion of the trail is not accessible, a wheelchair user could roll from the parking lot at the Palace of the Legion of Honor, follow El Camino del Mar east as it curves around the golf course, and take the well-packed dirt trail past Eagle’s Point to a bench along the path with a fantastic view of the Golden Gate Bridge.