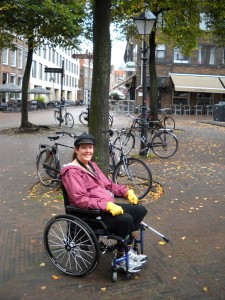 Because Haarlem is a quick 15-minute train ride from Amsterdam’s Central Station, we decided to take a day trip to this lovely city during our October 2010 trip to Amsterdam.

Haarlem’s train station, decorated with Art Nouveau from 1908, has elevators that allow wheelchair users access from the platform to the street level.

Two parallel streets flank the train station (Kruisweg and Jansweg); if you head up either street, you’ll arrive at the town square and church in six wheelchair-accessible blocks.

(Note: the sidewalks can be narrow, and there are often many pedestrians. The bicycle bell on Carrieanna’s wheelchair was, once again, a valuable tool in navigating through the crowds!)

Haarlem’s market square (Grote Markt), where 10 streets converge, has been the town’s centerpiece for 700 years. 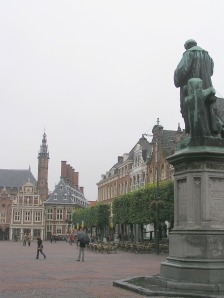 Food stalls intermingle with displays of clothing, souvenirs and other sundries. All were easy for Carrieanna to navigate. 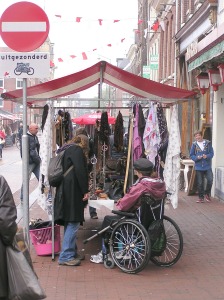 Overseeing the square is a statue of L.J. Coster, who is purported to have been the father of modern printing (some 40 years before Gutenberg invented movable type). In the statue, Coster holds up a block of movable type and points to himself, as if to say, “I made this.”

The statue faces Haarlem’s Town Hall, built from a royal hunting lodge in the mid-1200s, then rebuilt after a 1351 fire. (The façade dates from 1630.) The entry is wheelchair accessible, with a fully-adapted toilet – one of the few in town.

The 15th-century Gothic church, “Grote Kerk,” is located at one end of the Grote Markt. Moderately accessible, there is a tall step and a ledge to get in the door, but the interior is accessible.

The amazing organ within (100 feet tall, 5,000 pipes; said to have impressed both Handel and Mozart) is on the west end of the church, opposite the altar area. 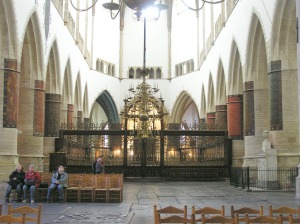 There is a free organ concert on Tuesdays at 20:15 from mid-May to Mid-October; an additional concert is held on Thursdays at 15:00 in July-August.

Haarlem is the hometown of Frans Hal, a famous Dutch painter in the 17th century. The Frans Hals Museum, a former almshouse for old men back in 1610, displays many of his greatest paintings.

Most of the interior is wheelchair accessible (except for a couple of steps into two rooms, and four steps into another). According to “Easy Access Europe,” the museum does have one loaner wheelchair, although it is first-come, first-served.

The courtyard was a lovely place to stroll and roll.

It is good to note that while the wheelchair user does pay an entrance fee, his or her wheelchair-pushing companion is allowed free entrance.

It is also important to note that the museum is closed on Mondays.

Although we did not take the canal cruise in Haarlem, Rick Steves describes it thus: “Making a scenic 50-minute loop through and around Haarlem with a live guide who speaks up to four languages, these little trips by Woltheus Cruises are more relaxing than informative.”

One of the boats is fully accessible, and should be reserved ahead of time.

We enjoyed our visit to Haarlem, and found it to be easy to get around, whether strolling or rolling! 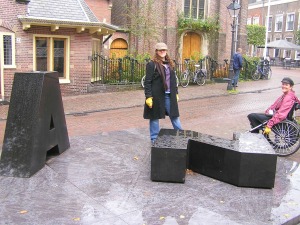 (All factual information is taken from “Easy Access Europe” by Rick Steves. Although this book is currently out of print, we found it to be a valuable resource and highly recommend finding a copy – used or new – when planning a trip to Amsterdam, Paris, Bruges, and many other major European destinations.)

One reply on “The Original Haarlem”

What a beautiful town. Thank you!