“New Zealand is a very accessible country,” I had been told prior to my recent month-long trip there. And with very few exceptions I found this to be true. For the next few weeks I will be sharing my experiences in this beautiful land, and when one of the “few exceptions” comes up, I’ll point it out .

I had prepared for months, researching travel guides and library books, checking Tripadvisor and taking lots of notes.

I had packed and repacked, finally deciding on my travel wardrobe (minimal), camera equipment (and extra batteries), and which sundries I just could not live without. (Original flavor Listerine was essential; I’ll write more about this godsend in a future post about Fiordland.)

I stocked up on cat food for my kittie-sitter, contacted the bank and the credit card company, stopped the mail and unplugged the computer.

I was on my way to New Zealand! For a month! Both islands! A dream come true!

“I finally slept – fitfully – for what may have been an hour or so. …

“I awake and turned on the flight tracker just as we crossed the equator. The International Date Line is next. Goodbye Feb. 4th, which I slept through (assuming there was time between midnight and the crossover).

“Looking out the window, I can see nothing below me (although I know the Pacific Ocean is there). Above, of course, are stars, many of them. Probably constellations I have never seen before. Just the start of a month-long adventure.”

We arrived in Auckland at 5:30 a.m. on a Tuesday morning, having left San Francisco at 7:30 p.m. on Sunday. Our 13-hour flight had taken us over the International Date Line (causing us to “lose” Monday), and across the equator to the Southern Hemisphere.

It was winter-gray in San Francisco when we left. We arrived to sprinkles and late summer in Auckland.

New Zealand time is 21 hours ahead of California, which was helpful in diminishing our jet lag. Although weary from the flight, we were eager to begin our month-long adventure exploring the Land of the Long White Cloud.

Prior to our trip we were warned that New Zealand has very strict Border Controls.

“There is an instant NZ $400.00 find for bringing in restricted goods. … Dispose of any fresh fruit leftover from your airline meal in the amnesty bins provided ….”

(We witnessed the detention and fining of one traveler after the Customs X-ray machine found a “forgotten” apple in his backpack. That’s a pretty expensive “Oops!”)

Finally ready to get on the road, we boarded our rented 12-passenger Toyota van, our driver sitting on the “wrong” side – in the right-hand seat. 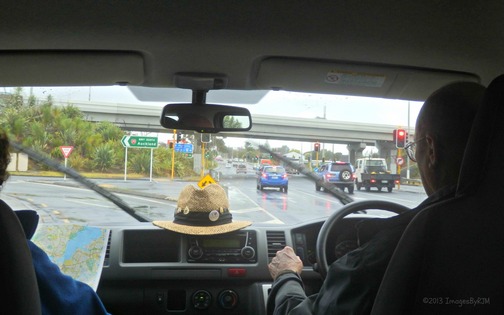 In Auckland, heading north to Bay of Islands

We got our first brief look at Auckland as we headed north toward Paihia and the Bay of Islands.

For the first four days we were a quartet of travelers: Our tour leader, Dick, my long-time friend Francine, our “unofficial” photographer and my travel roommate, Laurie, and me. (Seven others would join us on Saturday, when we returned to Auckland.)

Soon after leaving Auckland the rain stopped. The countryside was green and pastoral; gray clouds periodically parted to give us a glimpse of the beautiful blue sky.

Our first stop was Parry Kauri Park, where we stretched our legs and admired the 800-year old McKinney Kauri.

According to The Story of New Zealand, “The British navy was particularly interested in the high-quality timber of the NZ coasts. The kauri … provided long, straight spars for masts and booms of sailing ships. … Kauri timber was particularly good for shipbuilding ….” (Judith Bassett, Keith Sinclair and Marcia Stenson ©1985)

Our next stop was Whangarei, an important distribution (natural resources) and harbor in the Northland Region (and birthplace of Keith Urban, country music star). 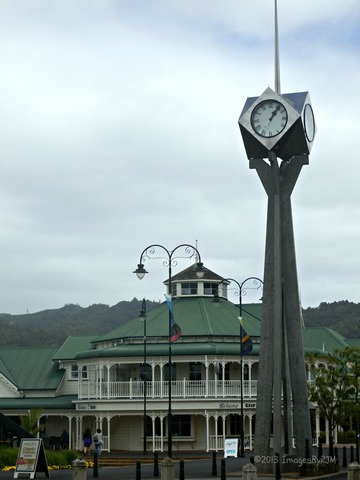 We had lunch – our first encounter with the high cost of food in New Zealand; $6.00 for a toasted ham and cheese sandwich – and explored the marina before driving to a few blocks to see the Whangarei Falls.

Here we enjoyed the 26m falls from a top-level platform, and then followed a short (and non-accessible) gravel path to the bottom for another view.

According to Francine’s Lonely Planet guidebook, these falls are “like the Kardashians: not the most beautiful, but one of the most photographed of falls.”

A final short drive and we arrived in the beach town of Paihia.

The Tanoa Paihia Hotel would be our home for three nights, easy walking distance to the center of town.

We concluded our first day in New Zealand with a little exploring of the town, a refreshing New Zealand beer (Speight’s),