During our third day in Paihia we visited the Waitangi Treaty Grounds, listed as “one of the 101 Must Do’s for Kiwis” according to New Zealand’s Automobile Association.

It was here, on February 6, 1840, that the first 43 Maori chiefs, after much discussion, signed the Treaty of Waitangi with the British crown (eventually over 500 would sign it). (Lonely Planet New Zealand, 16th edition, pg. 146)

After watching a brief introductory movie, we enjoyed a one-hour tour led by Lyle, a member of the Ngapuhi  tribe, who was well-informed about the history of his people and their relationship with the British.

I found the tour to be very informative and impressive, and I would highly recommend it.

A few things I learned:

Our tour included a visit to the Whare waka (Canoe House) and an up-close look at the 35-meter waka taua (war canoe) carved from gigantic kauri logs.

We then walked up the slight hill to the Flagstaff, purported to mark the spot where the Crown representatives and Maori chiefs signed the treaty.

At the Te Whare Runanga (Meeting House), a traditional Maori greeting was presented, after which other tourists were invited inside for a cultural performance. (Our group experienced this greeting and performance – along with a traditional hangi feast – during our visit to Tamaki Maori Village in Rotorua – a story to be shared in a future blog post.)

According to Lonely Planet (pg. 147), the “fine carvings represent the major Maori tribes.”

I was interested to learn that the while flag (“Flag of the United Tribes”) was the original New Zealand standard, and was never “unregistered,” although the British New Zealand Flag is the most recognized (and registered) New Zealand flag.

I found most of the Treaty Ground to be wheelchair accessible. There was a ramp into the small theatre where we watched the introductory film; the restrooms were clean and accessible, and the paths were easily navigable. 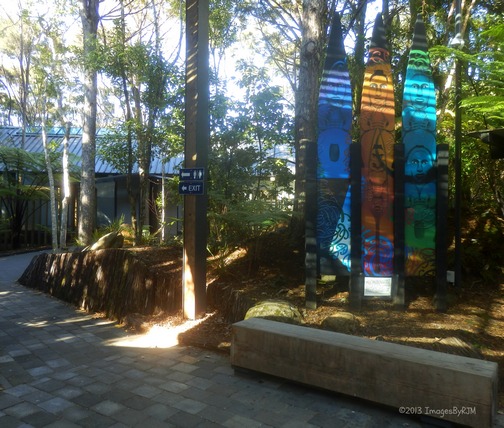 … after which the “path” appeared to be created by decorative bricks (see Flagstaff photo above) which would have been difficult to navigate. However, a wheelchair could roll on the grass next to the path.

The history presented, the fascinating Maori artifacts, and the beautiful scenery definitely make this a “must see” for anyone visiting New Zealand for the first time.

The Maori must be a fascinating people.