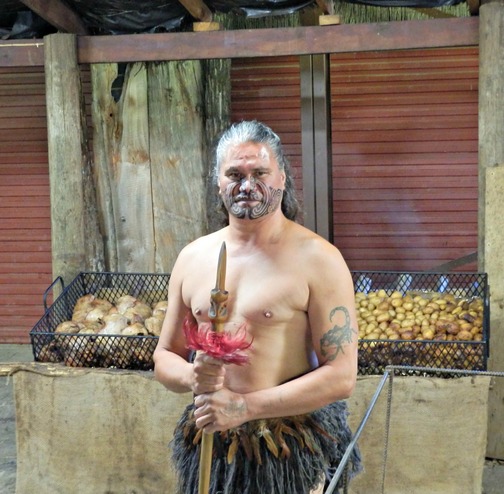 Our waka [bus] retrieved our group after having picked up fellow travelers at other hotels. While en route to the village, 15km south of Rotorua, we were taught some Maori words:

We used these words frequently during the night, as the experience truly was Awesome!

From Hongi Greeting to Hangi Feast

After the three wakas arrived, the visitors gathered around the entry area (wero), waiting to be welcomed by the chief in the traditional Powhiri ceremony. We were told that the sounds made by the warriors / greeters represented the sounds of the earth (for instance, insects and birds).

We also learned that the hongi, or pressing together of the noses (two times) in greeting, symbolizes sharing or giving of your breath to the one you greet.

We were advised that while taking photos was acceptable, laughing or talking during the greeting was inappropriate.

After the welcome we entered the recreated pre-European village, where we took part in some of the traditional dancing, posturing, warrior training and games.

I participated in the don’t-drop-the-stick game, a quick eye-hand coordination game that had me laughing and, alas, quickly eliminated!

We were invited to take a seat in the ancestral meeting house (wharenui), where we learned that its structure represents the body and spirit of the tribe, the extended eaves are welcoming arms, the decorative center beam is the backbone with ribs extending out on each side, and the life force of the building comes from the spirits of those who gather.

We then enjoyed dance and song, including the haka (Maori war dance) followed by a brief video about the culture and history of the people. 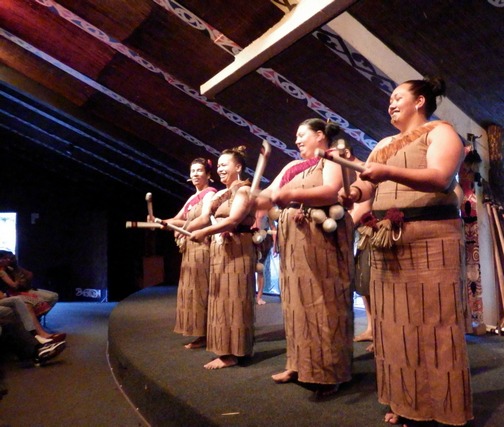 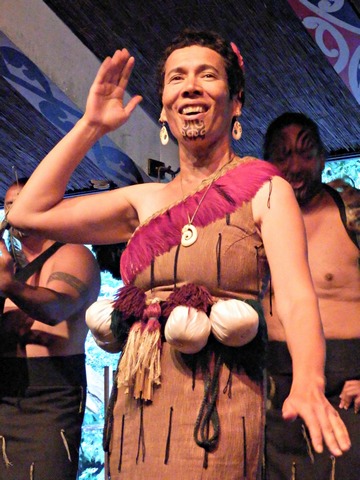 We were then taken to the cooking area, where we watched as the baskets laden with food were lifted from the hot earthen pits: Lamb, chicken, potatoes and yams.

These were transported to the dining area (wharekai) and added to the buffet table that also included salad, a spicy stuffing, carrots, fish, mussels, and bread. A traditional hangi feast!

We finished the meal with the choice of two desserts: Steamed pudding and Pavlova, a traditional New Zealand dessert (a baked meringue with a soft, moist center, topped with whipped cream and fruit). Delicious!

As the meal concluded, we were further entertained by song and stories, until it was time to reboard our waka and return to our own villages (hotels). At the request of our driver we sang songs from our native countries (USA, Argentina, Australia, Canada, England, to name a few) as she returned us to our various hotels.

While there I inquired about the wheelchair accessibility of the Village, and learned that it is accessible – although since much of the recreated pre-European village is unpaved, some effort would be needed to push the wheelchair. Still, it was doable.

The wharenui, the cooking area, and the wharekai were all level or ramped, and the restroom was accessible.

The only accessibility challenge I found was access to the waka (or bus).

In contacting the staff of the Tamaki Maori Village by email, I have been told that a foldable wheelchair can be placed on the bus, but the user would need to have their traveling companion(s) get them into and out of the bus.

This would not be a huge problem for Carrieanna, who can get up and down a few steps. However, for someone who cannot make those steps, it might be necessary for them to take their personal vehicle to the Village. They would miss out on the group camaraderie and the information shared en route.

Overall, however, the Tamaki Maori Village is wheelchair accessible and certainly a don’t-miss experience in Rotorua!