Although we only spent three days in Rotorua, we were very busy.

Along with our half-day visit to Te Puia and the thermal reserve, and the evening spent at Tamaki Maori Village, we also enjoyed side trips to view the Blue and Green Lakes, explore the Buried Village, spend a little time at Lake Tarawera, and picnic in the nearby redwood forest. 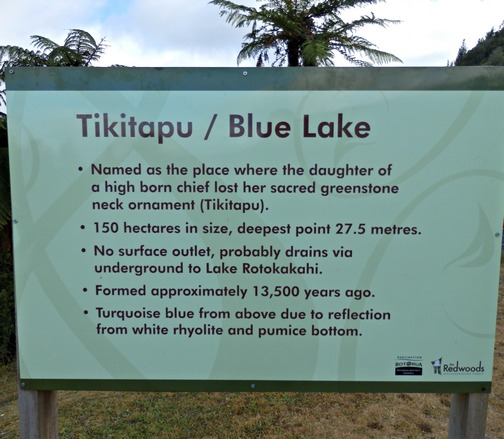 Additionally, I spent quite a bit of time at the Rotorua Museum, experiencing (through “high impact” cinema) the volcanic eruption and earthquake that created the city, learning about the local peoples (Te Arawa), and enjoying the quiet beauty of the adjacent Government Gardens.

Here are a few Rotorua highlights:

One of the optional activities offered – an opportunity I chose not to take – was a visit to the Buried Village, located 15 km from Rotorua.

According to Lonely Planet New Zealand, 16th Edition (pg. 305)  “… the buried village of Te Wairoa … was interred by the eruption of Mt. Tarawera in 1886. Te Wairoa was the staging post for travelers coming to see the Pink and White Terraces (which I mentioned previously). Today a museum houses objects dug from the ruins, and guides in period costume escort groups through the excavated sites.”

Although I was fascinated by the similarly-destroyed city of Pompeii when I visited Italy in 2011, my perusal of TripAdvisor and the reviews of Rotorua’s Buried Village caused me to decide not to visit.

Two of my travel companions did go, however, and both said they thoroughly enjoyed the walk to the nearby Te Wairoa Falls, and wished they had been able to spend more time in the museum.

While Kim and Laurie were at the Buried Village, the rest of our group drove to Lake Tarawera.  My journal notes remind me that this area is reminiscent of Lake Tahoe (California) and the vacation houses thereon. Heavily-forested, lush, and tropical. Lonely Planet similarly describes it as “picturesque and good for swimming, fishing, cruises and walks.”

We spent a little time walking along the shore, and admiring the beautiful black swans on the lake, before returning to retrieve Kim and Laurie.

After a short visit to the nearby redwood forest, where we ate a picnic lunch but did not explore much due to time constraints, we returned to town, and I returned to the Government Gardens and the Rotorua Museum.

Lonely Planet describes this museum as a “Top Choice” and I agree; this was one of my favorite New Zealand museums. I did not have enough time to fully enjoy the museum on my first visit, so I got a [free] return ticket and came back the next day.

Housed in a Tudor-style building which was originally an elegant spa retreat called the “Bath House,” the museum includes two small art galleries, a tour of the rooms where eclectic healing therapies were used, and a fascinating wing dedicated to Rotorua’s Te Arawa people.

Some of the things I learned, as noted in my journal:

And one of the best things I learned? Gallery stools are a godsend! 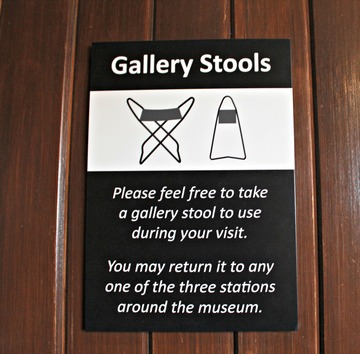 Some notes about accessibility:

The cinema, where we watched what Lonely Planet describes as “a gripping 20-minute film on the history of Rotorua, including the Tarawera eruption,” was wheelchair accessible. However, it might not be enjoyable for someone who is unable to transfer to the theater seats, which vigorously shake to simulate the earthquake.

The two art galleries, located on the upper level of the museum, can be accessed by an elevator.

However, the viewing platform in the Tudor Towers, where visitors can enjoy a panoramic view of the Government Gardens, Lake Rotorua and Sulphur Bay, can only be reached by climbing steep and narrow stairs.

Likewise the basement, which houses many bath house artifacts and where mud bath treatments were once applied, is only accessible via a steep set of stairs. Hardhats are also available (and strongly encouraged) for people who visit this lower level.

The rest of the museum, including the ground-level treatment rooms, the Bathhouse café, and the Te Awara gallery, are all fully accessible and absolutely worth visiting, as is the beautiful Government Gardens adjacent to the museum.

5 replies on “Rotorua Museum and the Government Gardens”

Love the photos. The gallery stools really impress me. US museums take note.

Yes, the gallery stools were greatly appreciated, and made it so much more pleasant to listen to the tour leader and view the exhibits at our leisure. They would be so handy in U.S. museums.

What an amazing trip! As always, excellent accessibility notes.

Wonderful memories. Rotorua and environs was definitely a highlight of our trip, if not THE highlight.

Yes, it was. As I said, it was my favorite North Island city!