After two and a half fun-filled, educational days at sea on the Celebrity Reflection, I was looking forward to arriving in San Juan, Puerto Rico, and doing a little exploring on land.

As a new cruiser, I was delighted to see the many shore excursion options available – a few of which were wheelchair accessible.

Mild, defined as “leisurely walking for minimal distances over mostly flat terrain” would include city tours by bus or private transport.

Strenuous tours were the most active, “designed for participants in very good physical condition.” These included snorkeling or scuba diving, a Segway guided tour, or a four-hour nocturnal canopy zip line adventure.

Not surprisingly, the wheelchair-accessible tours fell within the “mild” category, and Carrieanna and I chose to take the Old and New San Juan City Tour, followed by the Latin Traditions Show (a “Manager’s Recommendation” event).

(We were sorry that our late arrival in San Juan precluded us from taking the Bacardi Rum Distillery Tour. Maybe next time ….)

Because we wanted to ensure that there would be room for us (and the wheelchair) on these tours, Carrieanna and I booked our excursions a few weeks before we cruised.

As I mentioned in my previous post, I was especially grateful for the assistance of the shore excursion professionals who worked with the tour personnel in San Juan (and our other ports of call) to confirm that the tours we chose could, indeed, accommodate Carrieanna’s wheelchair.

We arrived in the Port of San Juan in the mid-afternoon.

The weather was perfect, and after disembarking we were eager to get on the bus and learn more about this U.S. territory!

For over two hours our guide Jennifer, a native Puerto Rican, drove us around the Old and New parts of the city, pointing out the great variety of restaurants, hotels, architecture and shopping opportunities. 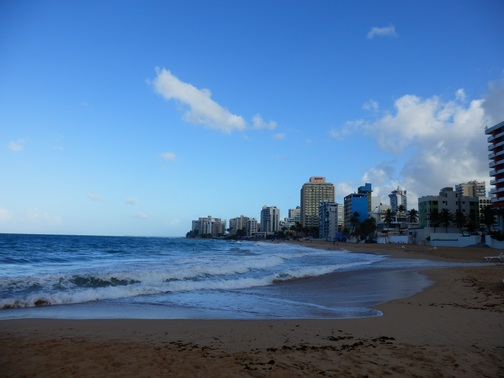 Throughout the tour she told us a little of the history of Puerto Rico and its relationship to the United States.

For instance, I learned that Puerto Rico is a commonwealth of the United States, and Puerto Ricans are U.S. citizens. However, those citizens who actually live in Puerto Rico are not allowed to vote in presidential elections, nor do they pay Federal Income Tax (unless they work for a U.S. Federal agency).

The local currency is the U.S. dollar, the island uses the U.S. Postal System, and the American flag flies over the capital of Puerto Rico. In addition, Puerto Ricans serve in all branches of the United States Armed Forces.

We were also told that the film industry is big business in Puerto Rico, primarily due to its non-tax status. In addition, 40% of U.S. pharmaceuticals are manufactured in Puerto Rico, which makes it the second-largest industry on the island.

Other fun facts: The national food is mofongo (a deep-fried dish made of mashed plantain with seafood and Creole sauce), the national drink is the Piña Colada (of course!), and there is a festival of some kind every weekend in Puerto Rico. These people like to party! 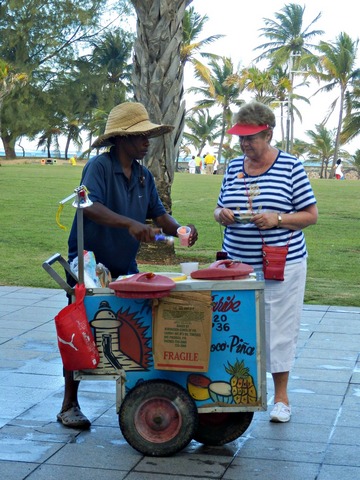 Our tour included a 45-minute stop at Fuerte San Cristóbal, San Juan’s second major fort (the first being El Morro which, unfortunately, we did not have time to visit). 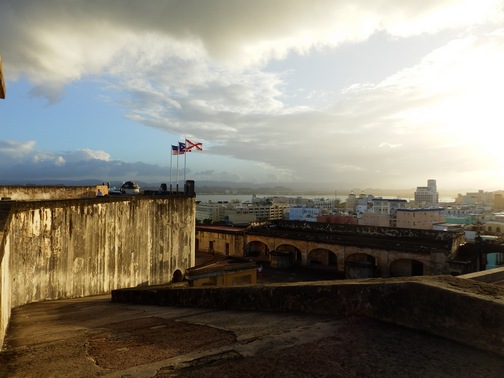 San Cristóbal was built to defend Old San Juan against land attacks from the east. In its prime, this fort covered two acres with a maze of six interconnected forts protecting a central core with 150 ft walls, moats, booby-trapped bridges and tunnels.

It became a San Juan National Historic Site in 1949 and a Unesco World Heritage site in 1983.

After our tour of Old and New San Juan ended, we returned to the pier and soon boarded another bus driven by Lionel (formerly of Chicago), who took us back into town to the El San Juan Resort and Casino for the 7:00 p.m. showing of the Latin Traditions show.

Upon arrival at the amphitheatre we were handed a glass of rum punch, escorted to our front row seats, and spent the next two hours enjoying this “high-energy, spicy variety show”! We were serenaded by flamenco guitarist Juan Carlos, who also accompanied two talented and beautiful dancers as they performed a variety of Latin dances.

Ship personnel were always available to help Carrieanna down the ramp and off the ship.

Although there was a 8- to 12-inch step into each of the buses, both drivers (Jennifer and Lionel) were helpful and patient as we took a little extra time entering and exiting the bus. They were also very careful in handling the foldable wheelchair.

The entrance to San Cristóbal Fort was accessible as was the restroom, and we used the elevator to get to the upper level of the fort.

El San Juan Resort and Casino seemed to be an older facility, so we had to use a side entrance to bypass the stairs in order to get to the theater seating. The casino restroom area, while accessible, was just barely wide enough for the wheelchair. Still, we were able to enjoy the show, returning in plenty of time to reboard the ship before the 10:00 p.m. departure time.

Seven hours in San Juan was not enough time to truly explore this lively city. I wish we had been able to stay for at least a full day; two days would have been even better!

Im a New Yorker living on the island and I can tell you there is a lot to see lot to do. On your next vacation book it for 2 or more days. Where you can explore accesible hotels, beaches, sites, festivals and many more. Would like to help so, email us for info.
It will be an experience. Looking forward to promote the island as a one of the best Caribbean accessible destinations.
Thank you so much for commenting on traveling to Puerto Rico.
Ivan
iveone@gmail.com

Thank you, Ivan. I would love to spend more time in Puerto Rico, and I hope any readers who feel the same will contact you.

I remember Old San Juan as an exciting place. You and Carrieanna sure saw a lot. I remember everyone on the island spoke Spanish. Some of them also spoke English. Statehood is always an issue. You are an angel for being such a wonderful companion for Carrieanna. Once again, I enjoyed the great photos.

Thank you, Ted!
Were you there as part of your term as GER?
I knew next to nothing about Puerto Rico, so it was a great learning experience for me. And there’s so much more to explore and, of course, photograph! I would love to return someday.
Jeri

My brother-in-law is Puerto Rican and his parents were born there. Thanks for giving me a brief history of PR and a lovely visual of San Juan.

I did not know that, Francine. Perhaps you should add the Eastern Caribbean to your bucket list. I think you’d enjoy it!

Travel is so exciting–but rarely enough time for all you’d like to see and do. That commonwealth status always confuses me at election time. I keep expecting to hear the exit polling results from PR!

So true, Virginia. There’s always more to see … which means I’ll have to plan a return trip. At least I’ll know where to begin my exploration next time!