On the other hand, the sights and bus and guide were delightful!”

Saint Martin / Sint Maarten is a 37-square mile island co-owned by two nations. The French side, with its population of 40,000, covers 21 miles of the island, while the Dutch side is 16 miles in size and has a population of 50,000.

We came ashore in Philipsburg, the capitol of the Dutch side, and boarded the bus for a three-hour tour of the island.

Our driver, Jimmy, was very careful in the loading and unloading of Carrieanna’s foldable wheelchair, and was gracious and helpful as she navigated the three stairs into and out of the bus.

Our first stop, and the highlight of our tour, was an hour-long stop at The Butterfly Farm, the first of it’s kind in the Caribbean region. 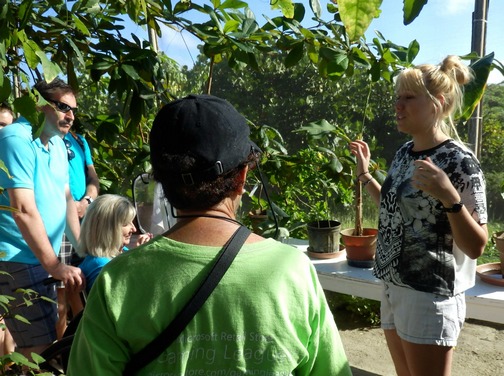 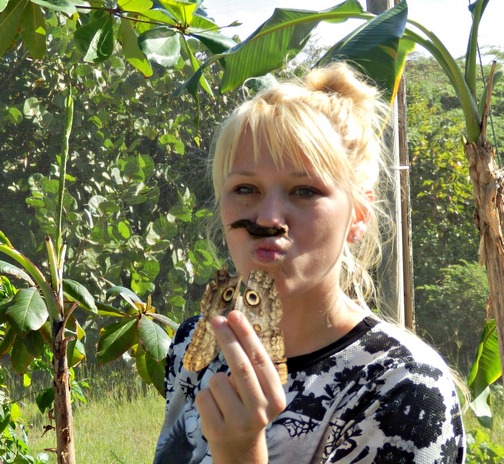 The owner’s daughter, 19-year-old Molly, shared the history and philosophy of the farm, pointing out and describing the various types of butterflies and their life cycles.

She then encouraged us to wander about and enjoy the beautiful inhabitants. 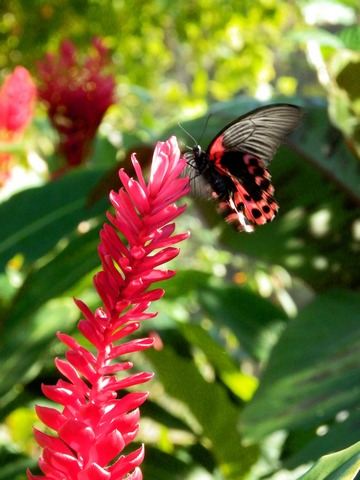 The paths were wide and level, and the well-packed dirt made it fairly easy for Carrieanna to maneuver around within the finely-screened enclosure.

A wooden ramp allowed access into the small shopping area. (And the complimentary cup of rum punch added to the ambiance!)

We then drove to Marigot, the capitol of the French side of the island, where we stopped to shop and enjoy the sun and colors – and the accessible public restroom nearby. 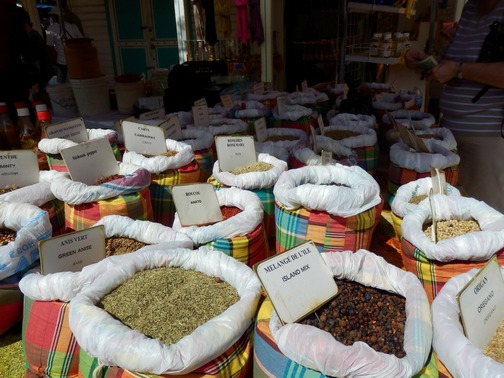 We returned to the Dutch side of the island, after a brief hilltop stop for a panoramic view of the bay and the beautiful Caribbean waters. 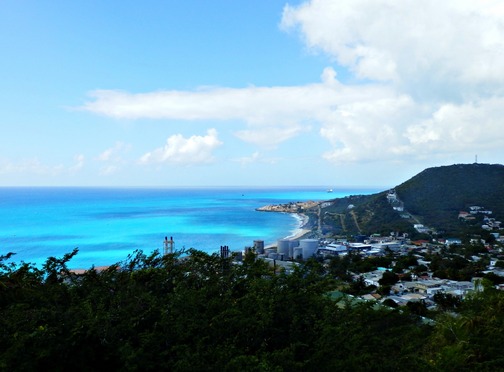 Lunch was, appropriately, French crepes, made by a lovely German lady, in the Dutch town of Philipsburg!

And then: More shopping, sunning and sightseeing until the 4:45 pm “All Aboard” deadline.

A little bit of history, from the ship’s onboard magazine, “Spree”

“St. Maarten’s strategic position at the elbow of the Caribbean island chain has earned it a reputation as the Crossroads of the Caribbean. The story begins thousands of years ago, when it and neighboring islands St. Barths and Anguilla formed one large landmass. The end of the Ice Age caused sea levels to rise gradually until the lowlands were submerged and the land was divided into the three separate islands. Local artifacts from ancient Arawak Indian settlements date back to 1800 BC and can be traced well into the 15th century.

“The Arawaks were a peaceful people who lived off vegetables, fruit and seafood. They called the island Soualiga, meaning ‘Land of Salt,’ which is appropriate considering that salt harvesting was one of the longest-sustained industries on the island. When the Dutch arrived, they sold the salt to traders in the Caribbean and ‘New England,’ which would eventually become the United States. …”

“On November 11, 1493, Christopher Columbus claimed the island on behalf of Spain. Since it was the holy day of St. Martin of Tours, he dubbed his new find Isla de San Martin. The European colonists didn’t populate the island until the 17th century, when it was claimed by the Dutch, French and Spanish. The Dutch and the French combined forces to control the land in 1644, and the Treaty of Concordia [considered the oldest active, undisputed peace treaty in the world] established an official territorial divide in 1648.

Legend has it that the island was initially divided during a footrace between a Frenchman and a Dutchman. The two met on the coast, shook hands, and set off in opposite directions. The border was drawn at the point where they met again.”

With the Concordia Agreement, the Dutch and French agreed that residents of either side of the island could be commercially active on the other side without any red tape or border difficulties.

However, a phone call from the Dutch side to the French side is an international call!

As noted above, the tour bus was reasonably accessible for Carrieanna, who could get up and down the steps with some assistance.

She could easily wheel around at The Butterfly Farm as well as the markets in both Marigot and Philipsburg.

There is a public restroom in Marigot with a separate room accessible for wheelchair users. While there was a line for ambulatory users – isn’t there always, ladies?! – the accessible WC was quickly available, and there was an attendant at hand who could help with the door if that assistance had been needed.

1 reply on “The Island of St. Martin – French and Dutch and Beautiful!”