Visiting one of the “Cities of the Dead” was high on my “must-do in New Orleans” list. 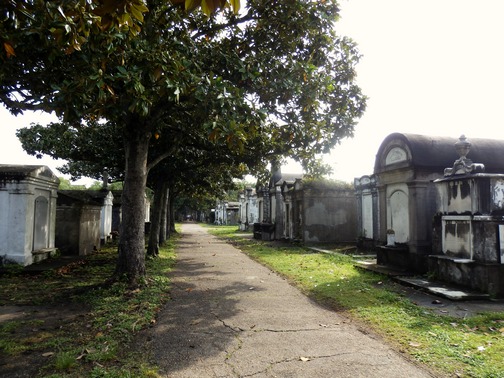 Our hotel was in the Garden District, so while Amanda was doing homework I went exploring, camera in hand, and found Lafayette Cemetery No. 1.

I visited midmorning on a Saturday and found very few people there – although one man did approach to tell me about the open crypt (see below). I’m pretty sure he was hoping I would ask questions and then give him a tip for being a “tour guide.” I did neither, just politely thanked him.

A Bit of History

According to Save Our Cemeteries, a non-profit organization dedicated to the preservation of the 31 historic cemeteries of New Orleans: 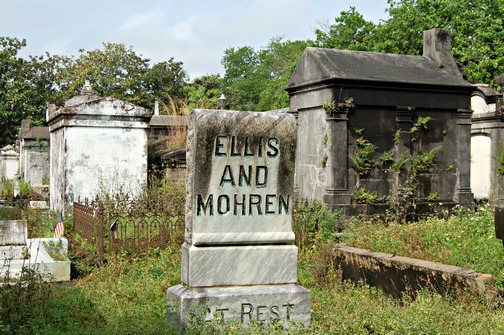 Distinguished by its intersecting avenues designed to accommodate funeral processions, it was the City’s first planned cemetery. Placed on the National Register of Historic Places by virtue of its significant history, location, and architectural importance, it retains its original size and configuration, and contains a variety of tomb types and styles. 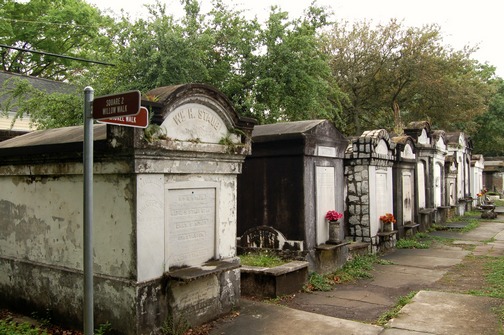 There are about 1,100 family tombs and over 10,000 people buried in the cemetery, a single city block.

Cities of the Dead

Because the city is built on a swamp, the deceased have to be buried above ground here in elaborate stone crypts and mausoleums. 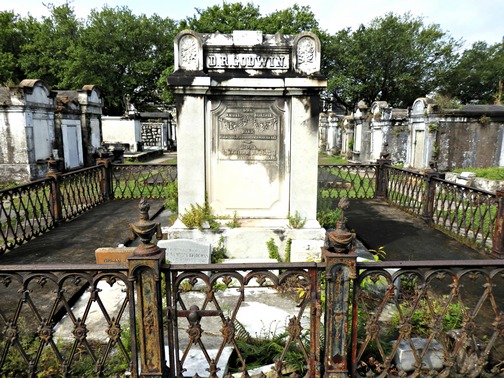 Over time the cemeteries, with elaborate sculptures and other decorative artwork embellishing the tombs, have come to come to resemble small villages. They are known by the nickname of “Cities of the Dead.” (Per Neworleansonline.com)

For the earliest settlers the dead were buried in common graves or along the riverbanks. But when the river rose or a major rain caused minor flooding, that didn’t work out too well. 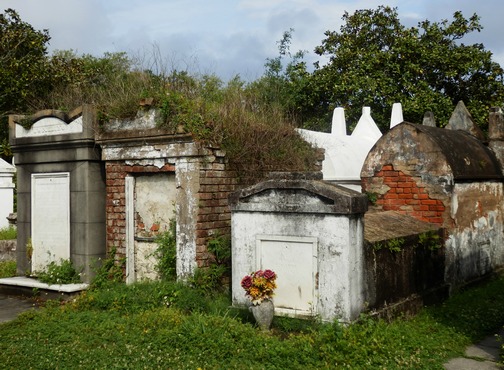 I love how the travel experts at Frommers explain, so the following text is quoted from that source:

Old Uncle Etienne had an unpleasant habit of bobbing back to the surface, doubtless no longer looking his best. This practice gave rise to some good stories (though experts debate their veracity) of coffins floating downriver, bodies weighted down with rocks, and holes drilled in caskets to let the water through and prevent them from popping up from the ground like deathly balloons. 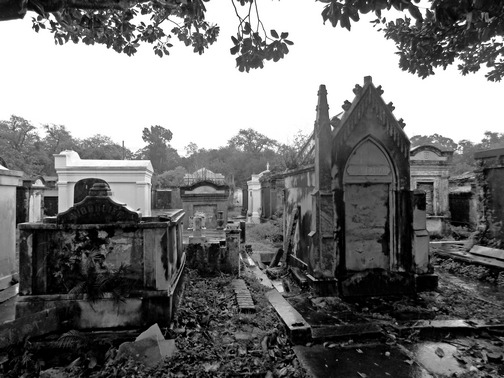 Add to that cholera and yellow-fever epidemics, which helped increase the number of bodies and also the possibility of infection. Given that the cemetery of the time was inside the Vieux Carré [French Quarters], it’s all pretty disgusting to think about.

It’s true that the high water table and muddy soil here influenced the popularity of the aboveground “condo crypt” look—the dead are placed in vaults that look like miniature buildings. But they are actually customary in France and Spain (and elsewhere), so it was just another tradition that the colonists brought with them to New Orleans. 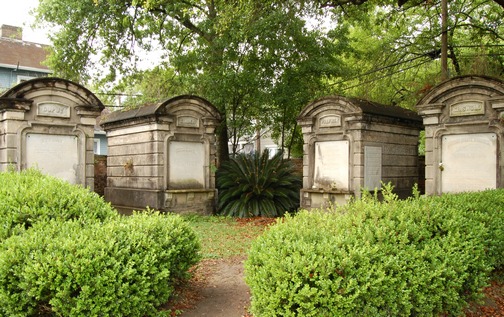 The aboveground vaults are also often adorned with stunning works of sculptural art, decorations that represent the family name, occupation, or religion (which was invariably Catholic; the first Jewish cemetery was not founded until 1828). 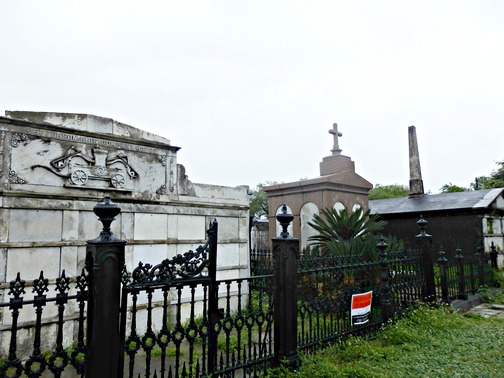 Some tombs were not owned by families, but by a group, like the firefighters, police, or a benevolent society.

So . . . all that tomb for one dead guy? Not so much. The tombs indeed host multiple bodies. The methodology is actually fairly clever. Inside the tomb are long chambers, one above the other, separated by shelves. When a casket goes in, it rests on the top shelf, and the vault is re-sealed with simple brick and mortar. Heat and humidity act like a slow form of cremation. 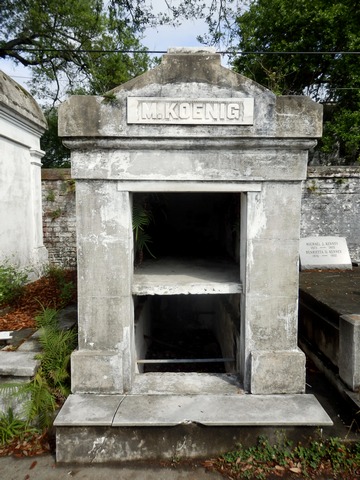 After a year and a day (by custom and rule—to accommodate the traditional year-long mourning period), another family member may be buried here. Whatever’s left of the first one is moved to the bottom level, and the casket bits are removed. 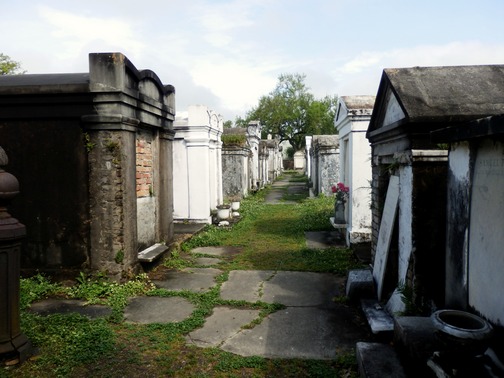 In some tombs, that shelf has a gap toward the back, and the remnants just get pushed back, where they fall through the gap to the vault below. Everyone eventually lies jumbled together to continue their quest to a dusty family reunion. And so room is made for a new casket, and the exterior is closed up once again. 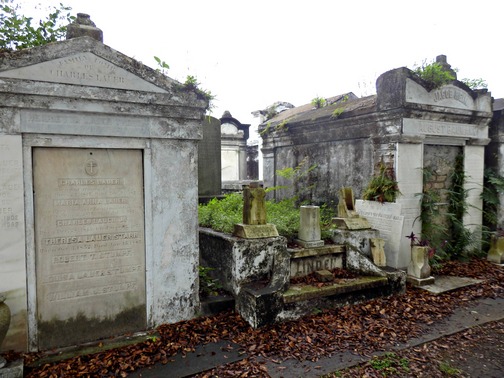 The result is sometimes dozens of names, going back generations, on a single spot. It’s an efficient, space-saving system that gives new meaning to the phrase “all in the family.” If a family loses two people within the year, one of them rests in a temporary holding vault until that year-and-a-day period has passed.

By law, families must maintain their tombs. Traditionally, All Saints’ Day (Nov 1) is when families gather to honor their dead, and in the days leading up to it you will still see people busily tidying up and washing down the sun-bleached, whitewashed brick buildings. Some are treated with lime, leaving a yellow or green tint. Flowers, candles, photos, and memorabilia are left on and around the tombs of loved ones. 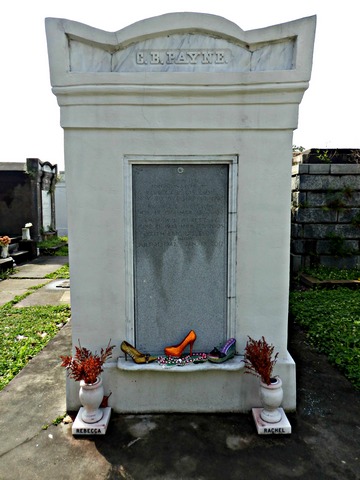 With a motorized wheelchair (and some four-wheeling skills) Lafayette Cemetery could be navigated fairly easily.

A manual wheelchair user would need to careful watch for breaks in the sidewalk, and the grassy areas might be difficult to roll through. 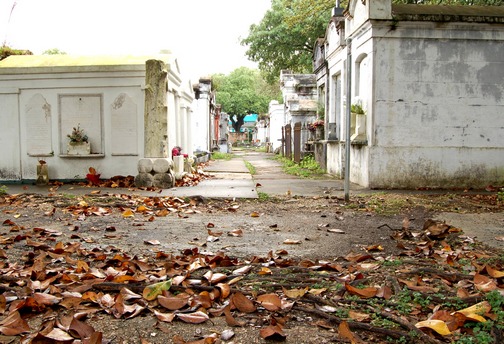 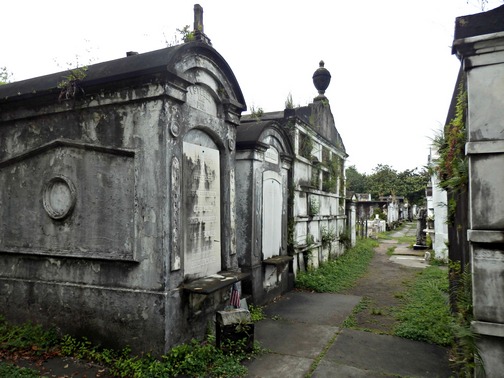 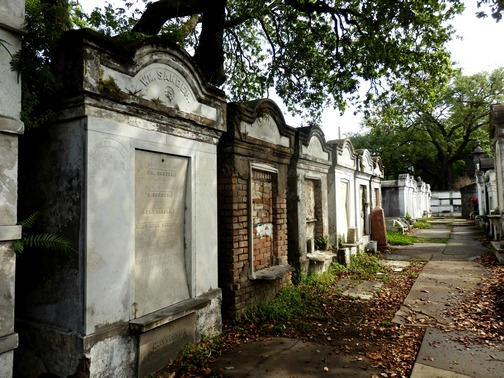 All photos: ©2015 ImagesByRJM – Not to be used without express written permission

4 replies on “City of the Dead – Lafayette Cemetery No. 1”

great content, thank you so much for sharing this.

Thank you; I’m glad you found value in the post!

Thanks for posting this article. I am a fellow disabled travel blogger and want to visit New Orleans as my next destination. I would really love to visit some of the cemeteries, but was concerned about wheelchair access. I use a power chair. Now I will definitely give it a try!

Thanks for the feedback, Karin! I’m so glad the article and photos were helpful, and I hope you enjoy New Orleans as much as I did!