I love trains. Not in the way Sheldon Cooper (of The Big Bang Theory) loves trains, but I love them. I love the haunting sound of their whistle in the distance and the promise of adventure they represent.

The photographer in me loves the lines and symmetry of the tracks; my inner traveler envies the people on board.

I’ve ridden on a few trains: From Orange County to San Diego, California; from Amsterdam to Paris; down the western coast of Italy, and up the eastern coast of Sicily.

And most recently I took a three-hour round-trip excursion from Skagway, Alaska, into Canada on the White Pass Scenic Railway, also called the “Scenic Railway of the World.”

I shared this journey with Carrieanna and 20 friends as part of the MS Foundation Cruise for a Cause travel group.

In mid-May of 2016 Carrieanna and I sailed to Alaska on the Celebrity Solstice, along with 50-plus others who either have Multiple Sclerosis or are partners, friends and/or caregivers of someone with MS.

Traveling northward from Seattle and visiting Ketchikan, Tracy Arm Fjord and Juneau along the way, we arrived at Skagway, the northern tip of Alaska’s Inside Passage. Here we disembarked the ship and boarded the train. 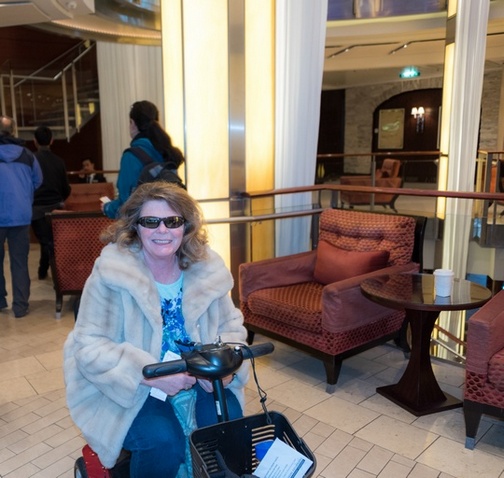 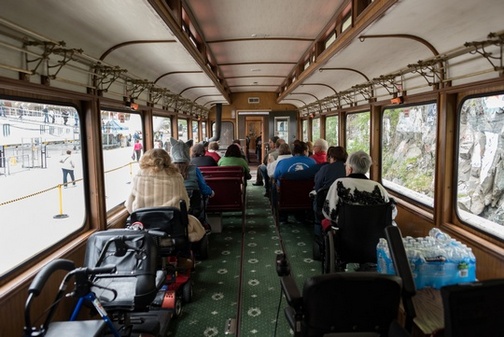 Although the 8:00 a.m. departure time was challenging for Carrieanna (fatigue is one of the many symptoms of MS), the camaraderie of many friends coupled with the awe-inspiring scenery made the early wake-up worthwhile.

Built in 1898 during the Klondike Gold Rush, this narrow gauge railroad was named an International Historic Civil Engineering Landmark in 1994. This is an honor shared by only 36 world civil engineering marvels such as the Eiffel Tower, Statue of Liberty and the Panama Canal.

The WP&YR railway was considered an impossible task but it was literally blasted through coastal mountains in only 26 months.

The $10 million project was the product of British financing, American engineering and Canadian contracting. Tens of thousands of men and 450 tons of explosives overcame harsh and challenging climate and geography to create “the railway built of gold.”

The WP&YR climbs almost 3000 feet in just 20 miles and features steep grades of up to 3.9%, cliff-hanging turns of 16 degrees, two tunnels and numerous bridges and trestles.

The steel cantilever bridge was the tallest of its kind in the world when it was constructed in 1901. 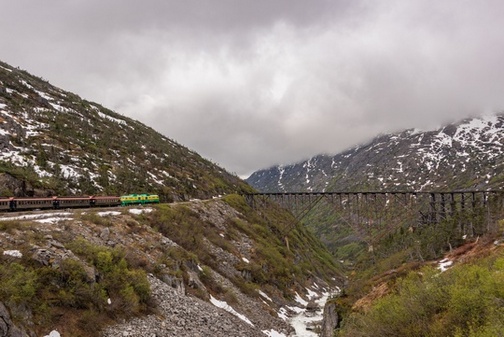 The 110 mile WP&YR Railroad was completed with the driving of the golden spike on July 29, 1900 in Carcross Yukon connecting the deep water port of Skagway Alaska to Whitehorse Yukon and beyond to northwest Canada and interior Alaska.

The WP&YR is recognized for the many difficult and hazardous obstacles that construction overcame: design challenges, granite mountains, steep grades, cliff hanging turns and unimaginable weather conditions. The courage and brave acts of the workers under the leadership of dedicated builders are recognized by this prestigious designation.

Along the Tracks We Saw …

Since I spent most of my time on the platform between our car and the next, I rarely heard the conductor’s announcements. However, I was told that there was a brown bear “on the left side of the tracks” and I was ready to snap a quick photo as we passed!

I also happened to be inside warming my hands when the explanation was given about the red snow we saw along the tracks. Called “watermelon snow” it’s a cold-loving algae bloom.

(If you’re interested in learning more about this phenomenon, and why scientists feel pink snow is a bad sign for the future, click on this link from EcoWatch.)

Most of all, I was inspired by all the beautiful scenery! 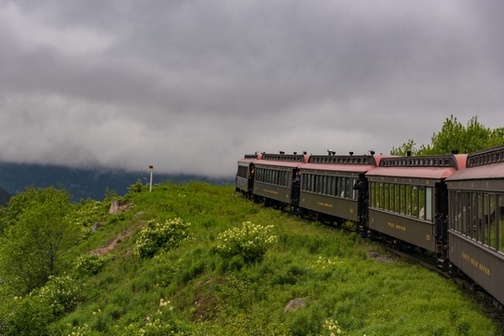 As described by the Shore Excursion brochure:

This tour is designed for guests who are unable to negotiate motor coach steps or who are full time wheelchair users and/or travel with a non-collapsible wheelchair or scooter.

Due to the closeness of the train to the ship’s dock, guests board the train at the end of the dock.

A train car with a hydraulic wheelchair lift will be available for each departure.

Full time wheelchair user guests do not have access to the viewing platforms outside the train cars.

Each Lift Car has a wheelchair accessible restroom.

Well Worth the Cost

Take my advice: If your cruise takes you to Skagway, take this scenic train excursion. The landscape is stunning, the accommodations are warm and welcoming, and the promise of adventure is fulfilled. You won’t be sorry!

More great photos. And a wonderful trip for you and Carrieanna. Becky and I visited the Skagway Elks Lodge when I served as National President. We met a young man there who was an engineer on the White Pass Scenic Railway. He suggested I ring a bell at the end of the bar. When I did so, I learned that meant I had to buy a drink for everyone in the Elks bar! Regrettably, we never did get to take the scenic train excursion.